More BMP failures at Oak Creek today.  We continue to urge the Regional Water Board to take strong action against this developer for continuing violations of water quality regulations. 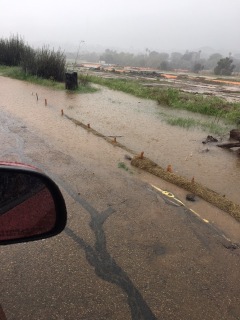 Don’t miss this great news conference held today in Escondido.  The video is here.  Please watch the comments of these leaders in the North County who support Yes on Measure A.

The press release is here
North County Elected Officials Urge Support for Measure A to
Give Voters a Voice in Land Use Decisions
Escondido, Calif. – Escondido Mayor Paul McNamara and Vista City Councilmember Corinna Contreras today urged San Diego County voters to vote Yes on Measure A, the Safeguard Our San Diego Countryside (SOS) Citizens’ Initiative. At a press conference in Escondido, the two elected officials highlighted the benefits of voter involvement in approving General Plan Amendments and spoke about the history of Proposition S, an Escondido land use rule comparable to the countywide Measure A.
“In Escondido, the passage of Proposition S encouraged development where it was needed most,” said Mayor McNamara. “Prop S has not impeded economic development or housing development in Escondido, and there is every reason to believe that Measure A will similarly guide developers to build housing closer to jobs and infrastructure.”
Under today’s system, developers have repeatedly proposed large luxury developments in fire-prone areas of unincorporated San Diego County. Measure A gives voters a voice in deciding whether zoning changes for large housing developments in rural and semi-rural areas of San Diego’s backcountry should be allowed.
“Measure A encourages following the County’s smart growth general plan, which is the key to meeting our greenhouse gas emissions targets and creating a more sustainable region,” said Vista City Councilmember Corinna Contreras. “When the County does not follow its smart growth general plan, it destroys habitat while creating more congestion in our region and making housing less affordable. Sprawl is bad for the cities and bad for the countryside. Vote Yes on Measure A to limit sprawl.”
San Diego County’s General Plan concentrates new housing in areas where roads, public safety, schools and other services are already available. These locations are easier to defend from wildfire and have a lower taxpayer burden because they don’t require new infrastructure. The General Plan also zones for housing in areas that would limit traffic impacts.
San Marcos Councilmember Randy Walton, who was unable to attend, released the following statement, “San Marcos and other North County cities are working hard to build the right kinds of housing in the right kinds of places. If the County continues to approve sprawl projects requiring amendments to their smart-growth general plan, it undermines smart regional planning for our entire county. A vote of Yes on Measure A will help limit congestion, greenhouse gas emissions and habitat destruction while contributing to a vibrant, livable North County with housing and job opportunities for all.”
“Measure A will give voters a say in San Diego’s land use decisions and will reduce the outsized influence of political contributions from developers; it will be a game changer,” said JP Theberge of Grow the San Diego Way and the Yes on A Campaign. “The General Plan has areas zoned for 60,000 more housing units in the county. Measure A will encourage us to build where we smartly planned for development rather than inefficiently and in a haphazard manner in our fire-prone backcountry. This approach has worked in Escondido and in many other jurisdictions, and it will work in the unincorporated San Diego County too.”
###
Paid for by Yes on A, Safeguard Our San Diego Countryside 2020, Sponsored by environmental and land use organizations, Committee major funding from Endangered Habitats League. | State ID # 1418132
We received the following request for volunteers. Check it out!


My name is Dominique Dashwood and I am an AmeriCorps fellow working with the non-profit, ProduceGood. I saw on your website that Escondido Neighbors United is committed to improving the Escondido community for residents. This is why I am reaching out to you with a great opportunity to alleviate hunger and conserve the environment in your city.
We are currently looking for volunteers for an event on Saturday, February 1st at an orchard in Escondido (the exact location will be released upon sign up ). People of all ages can participate outside with the butterflies and bees, picking citrus by hand or with a picker pole. By actively picking healthy produce for San Diego’s food insecure and preventing this excess fruit from going to waste, your efforts will benefit the people and environment in your community. Additionally, taking part in the event allows volunteers to experience firsthand the tactical aspect of food recovery principles and become ambassadors of sustainable food systems. Here is a video from one of our events so you can get a better idea of the volunteer roles: https://www.youtube.com/watch?v=x_xqSVuyPso&t=19s
I would greatly appreciate if you could pass along this information to members of your organization. The events are well-enjoyed by groups of volunteers. If you are interested in joining our efforts, please reach out to me (my information is provided below) and you may sign up directly on our website https://producegood.volunteerhub.com/event/index/11320973. Please note you must register and sign a waiver to join us. Once you sign up as a volunteer you can register for other available events in our calendar as well. Sharing has never been sweeter!
Thank you, and please feel free to reach out if you have any questions. I hope to see you out there!

Our friends at Sierra Club North County Group will be holding their first monthly meeting of the year on Tuesday, January 28th, 7 PM at Chalice in the Blue Room.  Address is 2324 Miller Ave.

The meeting is free of charge.

Today, the Chatham Barrel Yard October 2019 SemiAnnualDataSbmtl  was posted showing the results of the October, 2019 monitoring event.
Escondido Neighbors United will be reviewing the document and expects to have detailed comments, however a quick review shows that contamination is still in Felicita Creek in areas where people use the creek and several monitoring stations have higher contamination results than in previous sampling events. At least one well that is supposed to be sampled has not been.
ENU will also be asking questions about what the most recent massive erosion event caused by failure of the Oak Creek developers to control storm water may have on movement of contamination. This failure has already led to a Stop Work order and a Notice of Violation from the city.
We will share further information as we review the document.

We have a great opportunity to hear a great concert and raise funds to Stop Sprawl in San Diego.
THE SPIN DOCTORS will perform a concert on February 16, 2020 at the Escondido Arts Center.  Here is the info  https://www.stopsprawl.org/events

Uncontrolled sprawl is one of the the most serious problems in our region.  From increawsing carbon emissions, reducing quality of life, undermining our transit planning, and fire.  We have to stop relying on this antiquated type of development. Instead, we need to provide more housing in our urban core areas that is available to more economic levels.  Vote Yes and Measure A and NO on Measure B in the March 3rd election.

This concert is a fun way to help stop sprawl.

An update on the complaint filed by ENU.

The City issued a Notice of
Violation/Notice of Correction to Oak Creek on 12/31/19. While they worked hard
to get their BMPs in order by the deadline of today, we reinspected and found
them still deficient and issued a Stop Work Notice on January 6.  The site will be inspected again later
this week.
NOV and Photos of violations

Stop Work Order
The Regional Board inspected
unannounced last Thursday and those results are pending.
The mapping error ENU identified has been corrected and the result is the City will be inspecting every two
weeks for the remainder of the rainy season.

We hate to say ‘we told you so’, but there it is.  One of our major concerns about this development was the risks it posed to the creek, the park, and downstream residents.

Now that the rains have come, the construction site of ‘Oak Creek’, having cut the oaks, is now damaging the creek.

Downstream neighbors have spent the week cleaning up the creek, removing debris, and loads of sand from Felicita creek. The creek in the Park is brown, even days after the last storm.

ENU documented just some of the problem which we believe is a violation of the storm water regulations.

We attempted to report to the city (as it is Escondido’s storm water permit which covers this site) but were unable to.  The website for reporting still says that ‘Oak Creek’ is not in the city of Escondido.

As we brace for another storm tonight, ENU has reported this situation to the Regional Water Board and the County. 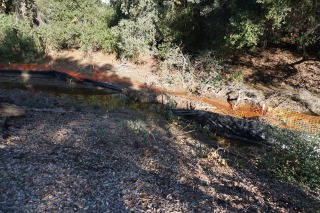 Join
together with
others.

Sponsored by North County Group of the Sierra Club.