The most recent update from the Save Our Escondido Library Coalition.  Please sign their library petition!

“While
we were disappointed that the judge failed to allow the temporary restraining order,
the lawsuit is still viable and we hope it will prevail,” stated frequent
library user and Escondido resident Victoria Tenbrink ,
“We take heart in the news from Santa
Clarita which just ousted LS&S from their library.  It is interesting that the Santa Clarita
Council estimates they will save almost $400,000 in doing so,”  in reference to the news that the Santa
Clarita City Council unanimously voted to end the LS&S contract last week.  Santa Clarita Votes Unanimously to
Take Back Library.
Another recent news report found poor performance by LS&S led to their
ouster, a sad harbinger for Escondido’s library.  As Escondido prepares to outsource, another
city drops firm.
In
response to the transfer of the Escondido public library into private hands, the
Save Our Escondido Library (SOEL) coalition announced five actions in response
to the transfer of management from the public to a private corporation

LIBRARY
DISTRICT PETITION DRIVE: No Bond
without an Independent Library District.
Building on the success of the
petition drive to oppose privatization of the library, which garnered over
4,000 signatures and mobilized residents, a new petition drive has been
launched.  The petition reads, “We, the undersigned, are calling for the creation
of an independent library district that would remove all control of the library
from the Mayor and City Council. Further, we will oppose any library bond until
management of our library is returned to public control and a plan is in place
to re-open an East Valley branch library.” Save our
Escondido Library Coalition is urging all residents of Escondido to sign this
petition.   Escondido
Library District Petition

COMMUNITY LIBRARY MONITORING PROGRAM: SOEL announced a program of community library
monitors. These volunteers will visit the library regularly and evaluate the
operations of the library. Visits will be unannounced.
COMMUNITY LIBRARY COMPLAINT
SYSTEM:  A particularly revealing exchange during the
October contract hearing at city hall was when city staff could not answer the
simplest question from Councilmember Olga Diaz about how complaints will be
handled.  It was clear to SOEL that the
city did not know how complaints would be addressed.  Slow response to problems was also cited in
the reasons LS&S was dropped from Santa Clarita. SOEL will also encourage
people to report any complaints to the city and to SOEL so that resolution
of them can be tracked. Complaints can be filed here Community
Library Complaint Form

STOP LIBRARY OUTSOURCING
WEBSITE—A Community Guide to Protecting your Library from Privatization.  Sadly, the story of the hostile takeover of
the Escondido Public Library is not an isolated one.  SOEL fully believes that LS&S will use
the Escondido takeover as a launching pad to attempt to control other county
and state public libraries. This new website shares information SOEL has found
during our fight and makes it available for other communities who will be
forced to fight to keep LS&S from taking over their library.  “I wish
we would’ve had access to information in a website like this when we began our
struggle, so we hope it will help other communities.” stated Escondido
resident Christine Nava.  The website can
be accessed here:  Stop Library Outsourcing: A Community Guide for Saving your Library

VOTER REGISTRATION DRIVE:  SOEL will be
initiate an Escondido voter registration drive. “It is now obvious to everyone, Mayor Sam Abed and Councilmembers Ed
Gallo, John Masson, and Mike Morasco do not listen to the public and are not
worthy to care for our public services, said Brenda Townsend, a long-time
Escondido resident.  Abed, Gallo, and
Masson are up for re-election in November, 2018.  SOEL is urging all eligible residents of
Escondido to
register to vote. (click
link) Voters can also check their status here.

“While we are disappointed in failure of the TRO,” stated Laura Hunter, an organizer with Escondido
Indivisible, “we are even
more energized, committed, and focused on Election Day, November 6, 2018 to
achieve a new mandate for change in Escondido.”
Please
email saveescondidolibrary@gmail.com  to be added to the Save Our
Escondido Library Coalition information list.
You can also visit Stop
Library Outsourcing for more information.
###
About Save Our Escondido Library Coalition: The coalition was formed by local
Escondido community groups and local residents in response to the outsourcing
of the Escondido Public Library.   The Coalition now works to restore the library
to public control.
Urban runoff.  It’s real.  Today’s storm is just a reminder that storm water runoff is a large source of pollution.  If you were out today you saw the large amount of foamy pollution in Felicita Creek…and the poor egrets trying to feed out of it.
Escondido Neighbors United (ENU) has repeatedly asked for our creek to be prioritized for a comprehensive clean up strategy. So far, no success. These photos should make clear that this pollution is a problem and needs to be addressed. We will post more on this later.  These photos taken between 10:50 and 11:10 am, January 9th, 2018 at various points along the creek and in the park.  The white is soapy foam. 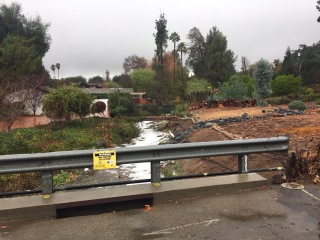 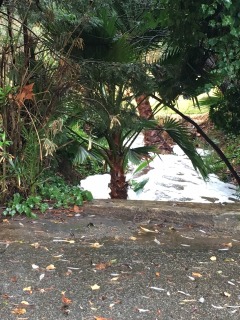