From our allies at the San Pasquale Valley Preservation Alliance.  Please donate to them so they can protect the region for all of us!

This weekend is the regular Fall Festival at our beloved Farm Stand West!
Please check it out.
Saturday and Sunday, Oct 28 and 29th
From 10 am to 5 pm

Escondido City Hall: For the
second time, Mayor Sam Abed and the councilmen on the city council ignored the unanimous recommendation of Library Trustees and a petition
from over 4,000 residents by voting to outsource the Escondido Public Library.  Over 125 people
demonstrated outside of City Hall and attended the City Council meeting yesterday
afternoon in opposition to a proposed contract to outsource the city’s sole
remaining library to for-profit, venture-capital-owned library outsourcing
company, LS&S.  Dozens of citizens
spoke during the public comment period, citing concerns ranging from the length
of the contract to the lack of specific accountability measures. Nevertheless,
the City Council voted 4 to 1 in favor of signing the contract, with
Councilmember Olga Diaz being the sole dissenting vote.
Diaz
stated, “We will mourn the loss of what we had forever”.
Councilman
Morasco abandoned his earlier opposition position and rejoined the rest of the
Councilmen, locking the city into a 10-year contract with LS&S.
This is
the first library in San Diego County to fall to the LS&S corporation.
This
vote and the way it was promoted should be of concern to all residents of
Escondido.  Relevant documents were
hidden from the decision-makers, overwhelming evidence produced of problems at
other LS&S libraries was discounted, and the Council ignored their own
advisors, the Escondido Library Board of Trustees, in pursuing this path.
Concerns
citizens voiced about the contract at the meeting included:
·
That allowing
LS&S to manage the library with public funds without transparency is not
supported by state law which states the Library Board of Trustees should manage
the library.
·
The 10-year
length of the contract. Originally the public was told this would be a 5-year
contract.
·
LS&S staffing
policies. One speaker read from comments of LS&S employees, who have
complained about low and stagnant wages, poor benefits, and low morale. Another
questioned how LS&S can make our library better using fewer, less qualified
staff than we have now.
·
Questions about
the accuracy of the calculation of the supposed financial savings.
·
Serious concerns
about problems with staff and finances that emerged in Jackson County, OR, once
LS&S (formerly LSSI) was bought out by a private equity firm.
·
Lack of
specificity in the contract. One speaker, who said he worked as a specialist in
contracting for 30 years, said he was alarmed by the lack of specific goals,
objectives, roles, responsibilities, and tasks in the contract, and ways to
measure if goals were met and tasks completed.
·
The failure of
the contract to include the usual indemnification of the city against legal
action and termination clauses that are clear and protective of the city’s
interest.
“Even if some City Councilmembers are not
opposed to the idea of outsourcing in general, this contract has so many
problems and questions, it is their duty to think carefully and make sure our
city isn’t being taken advantage of,” said Escondido resident Shelley Spisak. “It
doesn’t seem like they have done their due diligence as our elected
representatives.”
The flaws in the contract are significant. City
Attorney McGuinness struggled to answer the most basic operational questions
from Ms. Diaz such as how a complaint from a patron will be handled. The
contract also uses tax dollars to pay a purchasing fee to LS&S and caps
their expenses for energy to run the buildings. LS&S is also guaranteed a
3% increase each year of the contract, not to mention the considerable
corporate profits which have been 30% of tax payer funds paid elsewhere.
A letter from Ms. Cathy Shaw, a current Board member in Jackson County
Oregon, was rife with challenges her district was facing under LS&S, and warned
“Think long and hard about this decision. Once made, the lack of transparency
of the private equity firm will make a return to a community-held asset
difficult to recreate. And if a decision of this magnitude is forced upon an
unwilling and unreceptive community, the backlash may be swift and decisive.”
As one speaker testified in speaking against
the contract, “If you do support this, remember we all sit at the table of
consequences.”
“Having lived through this experience, this is
now about more than just saving the library, it is about saving Escondido from
this failed leadership,” stated Laura Hunter, an organizer with Escondido
Indivisible. “Our members will now look to the elections in 2018.”
Litigation is also under consideration.  Any readers interested in donating to the
Library Defense Fund should email saveescondidolibrary@gmail.com. 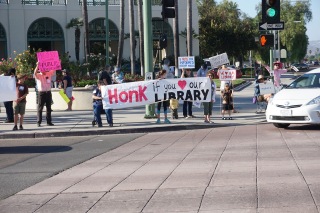 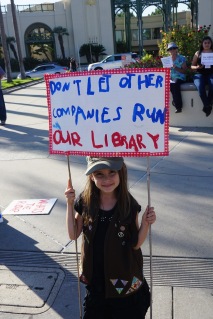 About Save Our Escondido Library
Coalition: The coalition was
formed by local Escondido community groups and residents in response to the
City of Escondido’s move to consider privatization of the Escondido Public
Library. The coalition seeks to educate themselves and the public and to
provide a conduit for Escondido residents to voice their concerns.

This is it everyone. The last chance we have to save our Escondido Library. Library Last Vote Oct 18 Flyer

Help
us Save our library
Attend October 18 City
Council meeting

Escondido Mayor Sam Abed and Councilmembers Ed Gallo and John Masson voted to move
forward to outsource operations of the Escondido Public Library to the private,
for-profit, out-of-state corporation Library Systems and
Services (LS&S) which specializes in taking over failing libraries. But,
ours isn’t failing. Outsourcing would spell the end of our library as we
know it.  The final decision will be made
Oct. 18 and will be in effect for at least 10 years.
Please attend this hearing and join over 3,000 residents already opposing outsourcing the
library because:
·    We would lose local control of an important
city resource.
·    Our local tax $$ would go to a corporate
organization in Maryland, not stay here in our community.
·    No alternatives (there are many) were
publicly evaluated so that the best option could be selected.
·    This action will further divide the community
and erode support for a bond for a new library.
·    This action will cause a loss of
volunteers, donations, and skilled library personnel.
·    Outsourcing is opposed by the Escondido Library
Board of Trustees and American Library Association.
·    The contract is for 10-20 years and is too
vague to be effectively monitored.
Our library is more
than a building;
it is the programs and people
who make it the soul of the community. We need to preserve our library as a
true community resource, responsive to the needs of our residents.  Outsourcing is the WRONG way to go.
The final vote is Wednesday, October 18 at 4:30
CONTACT Mayor Sam Abed, Ed
Gallo, and John Masson.
Email city council here                Email them all
at once using this link:   https://www.escondido.org/city-council-contact-us.aspx
Ask them to:
ATTEND COUNCIL MEETING
Wednesday, October 18, 4:30 PM
201 North Broadway, Council Chambers
Escondido
TALK to your friends and neighbors and ask
them to attend.  Help Save our Library
services!
For more info: https://www.escondidoindivisible.com/2017/07/24/on-the-issue-escondido-public-library-privatization/     Email us at SaveEscondidoLibrary@gmail.com